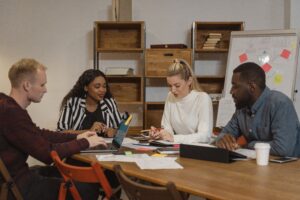 Just say no to bad bids By Mike Lisagor

Based on a chapter from How to Win in the Government Market.

A few years ago, I spent a half-day with a small GovCon firm helping them improve their business development process. However, it soon became apparent that their major challenge to growing to the next level was a lack of definition of what they wanted to be in three or five years, what their core solutions and competencies were, and what agencies they should target. This led to an animated discussion about their unrealistic win probability calculations, missing-in-action bid decision making process, and unwillingness to say no to dumb bids.

Some of the comments I heard were, “If we submit enough bids, we’re bound to win our share,” and “I’m afraid to say no to an opportunity because it may be a real game changer.” My prescription for this affliction was Gamblers Anonymous!

In general, the most successful companies I’ve worked with have found an effective balance between too little focus and too much. Unfortunately, for every executive who can inculcate some decision discipline into their culture, there are many more who lack the ability, patience or willingness to relinquish control. I’ve even watched some make multi-million dollar bid decisions in the hallway!

According to my highly statistical calculation (i.e., educated guess), the probability of building a solid, thriving company using a broad shotgun approach to submitting competitive bids is 22.3% (or maybe 24.5%). It works for some types of less complex services but is still the exception, not the rule.

This doesn’t mean laser precision on everything. Too much rigidity in the development of a bid pipeline will blind the company to new service and agency possibilities. But companies shouldn’t rely on serendipity to achieve their growth objectives.

One way to improve the decision process is for executives to encourage group decisions. Leaders who don’t, besides missing vital information and being labeled authoritarian, demotivate their staff and end up spending hours explaining their decision rationale and gaining acceptance. Interestingly, by their very nature, group decisions take less time, have a higher win probability, and are more motivating. They also result in more win parties!

Also, the adoption of a simple decision matrix with bid success criteria in the first column and some degree of scoring or color coding in the next column(s) is a must. It gives everyone a common reference, ensures all the win factors are considered, encourages more objective as opposed to emotional discussions, and results in more accurate win probabilities.

All that said, when it comes to long-term business growth, I’ve found that in general, the best answer is usually no!

A (usually) retired GovCon expert, writer, and blues musician, Mike Lisagor is the founder of Celerity Works and a co-founder of GovFlex.com. His books include, How to Win in the Government Market (with Mark Amtower), The Essential Guide to Managing a Government Project, and How to Develop a Winning SBIR Proposal (with Eric Adolphe). He can be reached at LinkedIn.com/in/mikelisagor and mike@celerityworks.com